5 things that will kill your dreams…

Kristen here – Do you know what’s holding you back? What’s between you and your dreams?

Turns out that there are only 5 things that can hold you back…  That’s right, only 5! Find out what they are in this week’s video…

Until next week, inspire yourself and inspire others!

PS. Which one of the 5 insights hit home the most for you? Let me know by commenting below the video! 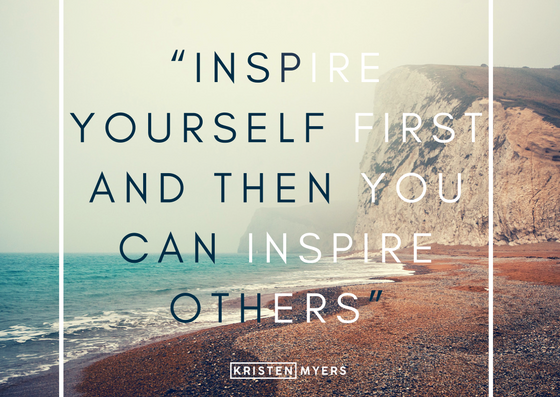 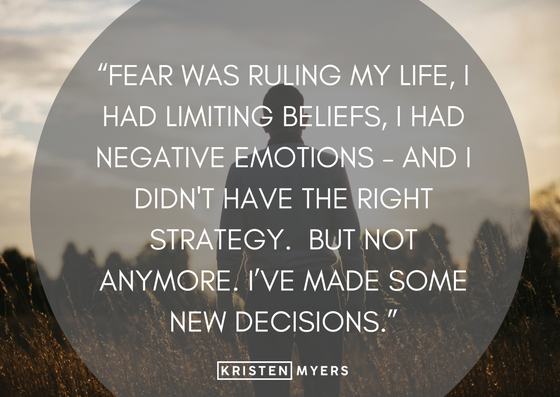 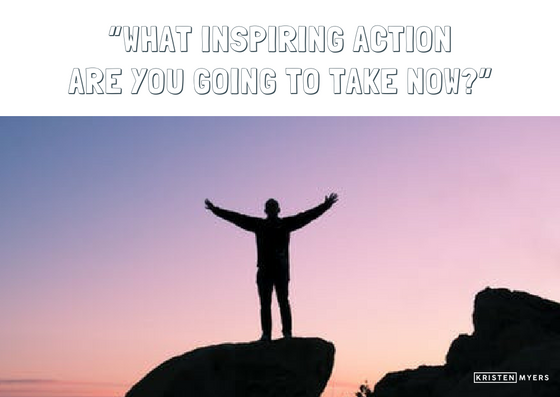 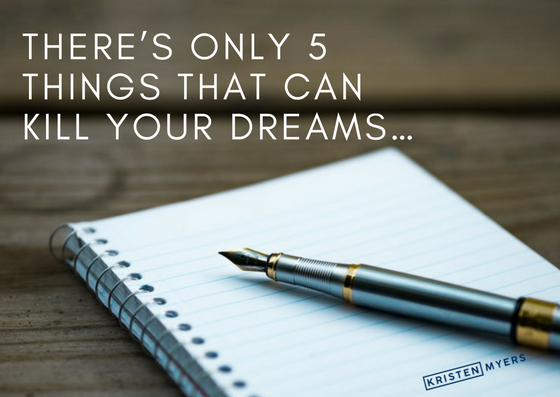 The following is the full transcript of this video with Kristen Myers. Please note that this video features Kristen speaking extemporaneously and unscripted.

Have you ever set a goal and not achieved it? Have you ever had a moment of brilliance? A great idea that was gonna change the world and change your life, and then only for you not to do it? And then suddenly things go back to the way they’ve always been? Well, me too, but I’ve discovered there are only five reasons why we don’t achieve the goals we set out to. Just five things, do you wanna know what they are?

Hi, I’m Kristen Myers and I’m the founder of Next Level Coach Co, where we help professional entrepreneurs who are looking to get to that next level in life, whether that’s more money, more joy, more fulfilment, more vitality. We help them get there by breaking through their unconscious limiting beliefs and negative attitudes so they can live their best most fulfilling and joyful lives.

We all get excited sometimes about new ideas because, well, they’re new, they’re exciting, they’re ambitious, and we really believe that we’re gonna do them when we think about them, right? And there could be goals in any area of your life, it could be career, relationships, finance, spirituality, any area really, but all too often something seems to get in the way, and that fiery ambition cools right down.

I had always wanted to be an entrepreneur, I recall when I was about 10 or 11 years old I had an ambition of building a roller coaster theme park, and it wasn’t so much about making all the money but more about having a place to go that was gonna be fun. A place that I could go and my friends could go and we could go anytime for free. In fact, the place probably wouldn’t have made any money at all cause there’d be so many free tickets, but I always had this ambition of having this thing that would inspire people and make me happy and make my friends happy, and other people happy.

But fast forward a few years, when I was about 16 or 17 years old a good friend of mine that I went to school with, well we started up an enterprise, we started up a start-up, and that was a business that was selling computers and spare parts, and we started by getting things delivered to the school and then we’d take them to the peoples’ places that had ordered them, and that was our first go at being an entrepreneur. And I remember when we started that business, we had a goal, and I had a goal of by the time I was 30, and remember I was 17 at the time, by the time I was 30 I was gonna be financially free and never have to work again in my life. Well, go to work, but not have to go to work, if you know what I mean.

Why are goals so important? Why do we set them in the first place? What is the purpose of a goal if we don’t take any action on it or if we don’t achieve it? What I’m about to share with you is super important because it’s the secret to understanding why people, and perhaps you, don’t achieve their goals. So here are the five reasons, let me draw them up on the board.

First reason, is fear. Fear is the ultimate killer, ultimate goal killer. It can be fear of what people think, fear of failure, fear of rejection, fear of other people’s’ opinions, fear holds so many people back. Including me, and when I think back to that story of running that rollercoaster park, or maybe more realistically, that start-up enterprise selling computers and spare parts, fear kind of killed that.

I mean, by the time I was about 20, 21, 22, I had these great ambitions of building this big company, but then fear started to kick in, like what if I’m not gonna make it? What if it’s gonna fail? What will people think? What will people say? So that was the ultimate killer. Then an opportunity popped up for me to go and pursue a corporate career path that was a great opportunity with a steady paycheck, security of being in a big company, what choice do you think I made? Fear was a big influencer in that decision. So the first point is fear.

The second point is limiting beliefs. Limiting beliefs are the things that you tell yourself that you believe to be true. They might be things like, I’m not good enough, I’m not smart enough, I’m too old, I’m too young, I don’t have enough experience, I have too much experience, things like that, any kind of statement that you’ve said, and told yourself so many times over and over that you believe it to be true. It’s a belief that’s actually limiting you. I have had plenty of these over the years, the most common one really for me has been, I’m not good enough, or I’m not experienced enough, like how can I show people how to do this? Or how can I explain to people how to do that if I haven’t done it before to the full extent? But they’re just limiting beliefs.

The good news is now that we know that there’s five things to deal with, we can do something about it, and the good news is that I have a program just for that, for wiping out the fear, wiping out the limiting beliefs, getting rid of the negative emotions, and creating the alignment and setting up the right strategy. It’s a program that I’ve been through myself, and I can honestly say that without having been through that program there’s no way that I would be standing in front of you direct to camera today being here, doing this, taking the leaps that I’ve taken, and being here to share it with you. It’s a program that’s safe, fun, powerful, and effective, and it has proven results. And I’m really looking forward to sharing it with you.

As I might have shared with you previously I’ve always been the high achiever, but the person in the background, shying away from the spotlight. Getting things done, making a difference, but in the background, never being the centre of attention. And that’s partly because of these issues, that fear was ruling my life, I had limiting beliefs, I had some negative emotions from the past, and I had some inner conflicts, and I didn’t have the right strategy, but not anymore.

So which of these five sticks out the most for you? Which one has been holding you back the most? Which one’s been blocking you? Now that you’re aware of these, what are you going to do about it? What inspiring action are you gonna take? I’d love to hear your feedback, please let me know by commenting below the video. If you’re ready to take even more action, you’re ready for that inspiring action then I’ve got just the program for you.

Shortly I’m gonna be opening up registration to my upcoming free webinar, my upcoming webinar is how I crushed my fear and went for it. It’s going to be a story and insights about how I rewired my mind for success and joy and fulfilment, and how I’m taking my life to the next level, and how you can as well. I’m gonna cover three crucial topics about where you live in your head and what that does for you, your three minds, what they are, how they work, and how you can tap into them and unlock the unlimited power that’s within you, and the third one is your internal dialogue and internal communication, how what you tell yourself drives your life, and how you can take charge and master your internal communication to master your life.

To register for the free webinar, it’s at KristenMyers.co/FreeWebinar. I can’t wait to hear from you, let me know how you’re gonna deal with these five things in your life, and until next week, inspire yourself and inspire others, cheers.

The #1 Thing That Makes All The Difference

Hi, Kristen here - after speaking to so many successful people in the past week, I’ve found there is 1 key ingredient that they ALL have in common. It’s the 1 thing that makes all the difference. It separates success from failure, happiness from misery, and...
Watch Now

Get outside your comfort zone

Hi, Kristen here - sadly, most entrepreneurs and executives won’t create the business and success that they dream of, even though they work so hard! And only 2% of them will make it all the way to the top. What is it about the top 2% of people that makes them...
Watch Now

The Secret To Happiness

Hi, Kristen here – So it turns out that just because your friends on social media look happy, from their posts… they might not actually be that happy! But did you know there are just 3 simple keys to more happiness in life?! Find out what they are…

Simple steps to wake up refreshed

Hi, Kristen here - You know better than me that sleep is one of the most important components of a healthy, productive and happy life… yet many people I’ve spoken to have told me they have trouble getting to sleep, staying asleep or have an overactive mind…...
Watch Now

How to set goals and achieve them

Hi, Kristen here - in June, we’re approaching the Australian end of financial year - which means that many people in the corporate world will be looking at the goals they set a year ago and reviewing if they’ve achieved them… (because it might affect bonuses, right??)...
Watch Now

Watch out for the CRAZY people!

Have you ever gone to a park, or somewhere in the city and seen a crazy person? Maybe you don’t even need to go to the park or a city centre… maybe you just have to look around at work or at home? But you know the type…